Observe how the security nature, the mother of mankind, was careful to spread everywhere a touch of madness. Infused more passion than reason why it was anything but sad, difficult, ugly, bland, annoying. If mortals beware of any relationship with the wisdom, old age would not even there. If only they were more fatuous, foolish would enjoy happy and happy to eternal youth. “Human life is nothing but a game of madness.” (“Praise to the madness,” Erasmus from Rotterdam) 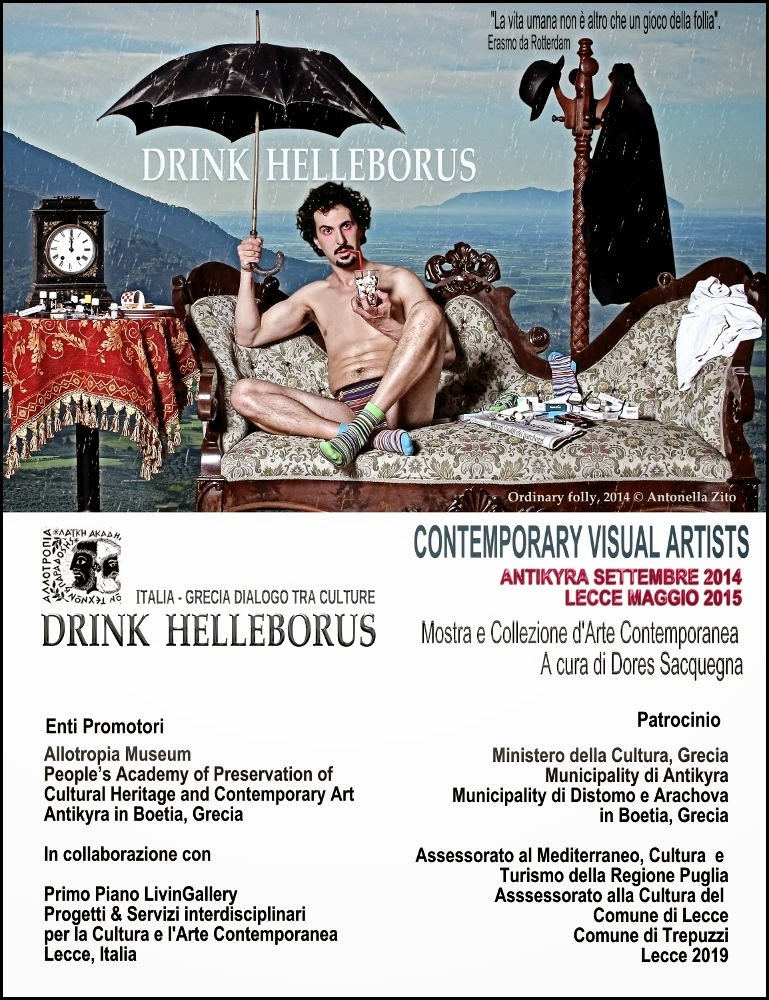 DRINK HELLEBORUS is the title of the event starring Greece and Italy in a cultural and interdisciplinary dialogue in the field of contemporary visual arts. The project is a collaboration between Dimitris TZOUVALIS and Demetra PARASHARAKI – directors of the Museum allotropy People’s Academy of Preservation of Cultural Heritage and Contemporary Art of Antikyra in Beotia – and Dores SACQUEGNA, artist, curator and artistic director of the Primo Piano LivinGallery in Lecce. DRINK HELLEBORUS is a careful cultural proposal, designed to promote broader knowledge, research and experimentation in the visual arts, documenting, through site-specific artistic residencies, research and artistic aesthetic of Italian artists with a predominance from the Puglia’s Region.
The event sponsored by the Ministry of Culture in Athens, Greece, Department of Mediterranean Culture and Tourism of the Puglia, the Department of Culture, Tourism and Recreation of the City of Lecce, Friend of Lecce 2019, the Department of Culture of the Municipality of Trepuzzi (Le), the Department of Culture of Antikyra and Municipalities of Distomo and Beotia in Arachova, officially starts September 5, 2014 and ends in 2015, with the presence of Greek artists in Puglia’s land.
Antikyra is a city built on the coast of the ancient Phocis, a natural harbor on the north shore of the Gulf of Corinth and inhabited since prehistoric times. The story goes that the city took part in the Trojan War with 40 black ships, commanded by the brothers and Schedios Epistrophos; in 620 BC it was destroyed by an earthquake. To date, you can see the remains of the Temple of Athenapallas (built between 550-575dc) on the side of the hill of Syrose, the temple of Artemis in the Bay of Kefalis, the temple of Apollo and other sites of importance oncology. According to the geographer Pausanias, there was also a giant statue of Praxiteles, who represented the goddess Artemis huntress, with her dog, whose image you can ‘see the copper coins minted in 210 BC. at the site of Palatia. Antikyra was founded by the legendary hero Antikyrefs which was said to have cured Hercules from melancholy and madness, black and white using the rhizome of the plant native and pharmaceuticals called “Helleborus / ÅëëÝâïñïí”, a plant that grows on the slopes of Mount Elicon. In the time of economic crisis in Italy and Greece, which caused an unprecedented economic downturn, this ancient Greek phrase takes on a special meaning that aspires to become a motto of our times “Drink Helleborus.”
The curator of the exhibition, Dores Sacquegna, invited artists to “drink metaphorically” this magic potion and give vent to their creativity, contributing exponentially to the realization of a permanent collection and exhibition of contemporary art, whose inauguration is expected to be 11 September 2014 at 20.00 at the Museum “allotropy”, People’s Academy of Preservation of Cultural Heritage and Contemporary Art, for Antikyra.
In the week from 5 to 11 September Antikyra, will become the privileged stage of contemporary art in all its forms. Rich is the calendar of events that includes artistic and cultural events and concerts, in various places of the town. A real Festival of the Arts, where Italian and Greek artists will experience on-site – and interacting with the public – their performances, with site-specific installations made during the period of residence, workshops and open houses, dances, and workshops and walking map in places of myth among Antikyra and Delphi.
In this context, the “Open House” by Greek  artists and artisans Greek: Takis Vgontzas / Antikyra, Spiros GOURIOTIS / LEVADIA, Monika THEOCHARI / Antikyra, Konstantis SKANTZIS / Desfina, George STAMOS / LEVADIA, Apostolos BALAKAS / Antikyra and solo exhibition of Konstantinos ANGELOU curated by Polyxene KASDA in collaboration with Demetra PARASHARAKI in adjacent rooms of the Museum allotropy.
The selected Italian artists on residency are: Silvia Maria GUARNIERI/Roma; Oronzo DE STRADIS/Mesagne(Brindisi); Maria Rosaria SACQUEGNA/Trepuzzi (Le); Francesco PERRONE/Trepuzzi (Le); Andrea BUTTAZZO/Lecce; Massimiliano MANIERI & Simona SCHIRINZI/Lecce.
Other artists are: Giovanni ALFONSETTI/Mesagne (BR), Antonio BARBAGALLO/ Napoli, Andrea BUTTAZZO/Lecce; Alice CARACCIOLO/Lecce, Giorgio CARLUCCIO/ Tuturano (BR), CHEKO’S ART/Lecce, Pina DELLA ROSSA/Napoli, Luigi FILOGRANO/Bari, Fabrizio FONTANA/Brindisi, Michele GIANGRANDE/Bari, Giovanni GRAVANTE/Poggiardo (Le), Donato Bruno LEO/Brindisi, Maria Luisa IMPERIALI/Milano, Giovanni LAMORGESE/Bari, Margherita LEVO ROSENBERG/Genova, Gianna MAGGIULLI/Bari, Damiamo MALORZO/Brindisi, Andrea MATTIELLO/Pieve a Nievole (PT), Alessandro PASSARO/Mesagne (BR), Lucia ROTUNDO/ Catanzaro, Dores SACQUEGNA/Lecce, Vito SARDANO/Monopoli (Bari), Maria Antonietta SCARINGELLA/Campi (Le), STREET ART SOUTH ITALY/Lecce, Maria Irene VAIRO/Salerno, Antonella ZITO/Francavilla Fontana (BR).
Thanks to the generous donation of the works of the artists involved, the Museum Allotropya, it will become a favorite place of the Italian presence abroad, as a seal of intercultural and human dialogue between Italy and Greece.
INFO:
ALLOTROPIA - People’s Academy of Preservation of Cultural Heritage and Contemporary Art, Gymnasium of  Antikyra in Beotia; Telephones: 0030 22670- 42698,  0030 6977.261.015(mobile)   0030 6936.053.484 (mobile); E-mail: allotropia@yahoo.gr Website: www.allotropia.gr (under construction)
PRIMO PIANO LIVINGALLERY – Progetti & Servizi Interdisciplinari per la Cultura e l’Arte Contemporanea. E-mail: pplgculturalassociation@gmail.com Website: www.primopianoatelier.com
drink helleborus, antikyra, allotropia, grecia, people's academy of preservation of cultural heritage and contemporary art, gymnasium of antikyra, beotia, primo piano livingallery, primo piano living gallery, lecce, gallery, exibithion, dores sacquegna, andrea mattiello, italian artist, italian art, art, contemporary art, artista emergente, emerging artist, italian emerging artist, artwork, livingallery, 2014